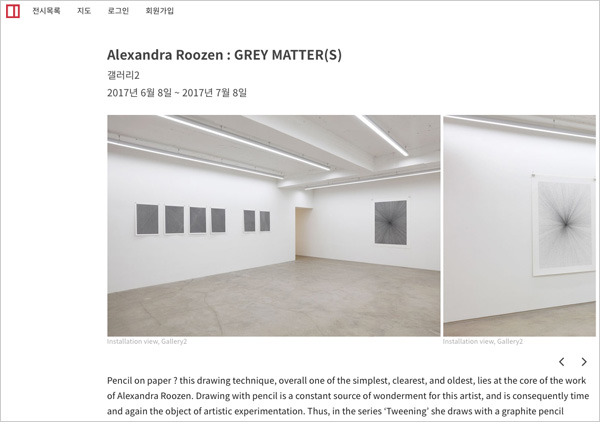 Pencil on paper – this drawing technique, overall one of the simplest, clearest, and oldest, lies at the core of the work of Alexandra Roozen. Drawing with pencil is a constant source of wonderment for this artist, and is consequently time and again the object of artistic experimentation. Thus, in the series ‘Tweening’ she draws with a graphite pencil mounted on a drill, or in her works with the title  ‘C-Point’, flattens broken and partly pulverized pencil leads into the paper’s surface with an intaglio press. Or, she’ll photograph a tiny facet of graphite on paper and abstract it through a severe enlargement, whereby it appears as though it were a barren landscape from a distant planet. Roozen’s inquiry into the process and material of drawing is generally carried out through extensive series, each differentiated through self-imposed formal rules. ‘To Bend’ is a very good example of this; a series which distinguishes itself through a clear, thoroughly suggestive pictorial structure and which, with differentiated means, investigates the relation between surface and imaginary pictorial space. The rationale of these works consists in dividing the surface of the paper, with the help of a long guideline fixed on a pivotal point, into narrow segments like slices of cake, and then filling them in, one after the other, according to a previously determined “rule”. At the start, the midpoint was always identical with the mathematical middle of the page, so that an optical alignment forms; a thoroughly hypnotic pull towards the center, at which point – depending on the composition – all pictorial information appears to collapse inwards or alternately radiate outward. Later arose surfaces with eccentrically placed pivotal points; some even located well off the surface of the paper. The filling-in of extremely narrow areas can occur with delicate pencil lines, with thickly arranged, powerful and roughly right-angled wads of lines, or also in an intuitive exchange of dark sections and white voids, all of which amount to a disconcerting fabric of varied rhythms and patterns, consistently interrupting and reordering. As clear as these rules are, the concrete execution by hand is no mere mechanical act, rather it leaves enough place for exhilarating differentiations, deviations, value fluctuations, and so on. Depending on the concrete execution, a deeper or flatter illusionistic space is formed. Abraded by countless marks of the pencil, the middle seems like a black hole or a dark source of radiation that dominates all of the pictorial events. The title ‘To Bend’ alludes to the fact that the imaginary space is touched all around and thereby simultaneously curved and contorted, whereby a profound pull grows in some images that is at times reminiscent of utopian architecture. Thus, if as a viewer one indulges in the undertow-effect of these images it’s a thoroughly shocking moment when, upon approaching them, one suddenly observes the spatial effect break down, revealing the material basis as such: pencil on paper.