Between Eye and Understanding 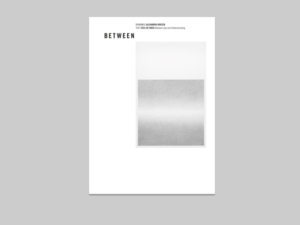 Cees de Boer studied Dutch, Literary Theory and Philosophy. In 1995 he obtained his doctorate with a thesis on Max Ernst’s collage novels. He has been active as a lecturer, writer and curator (2015, Venice Biennale) since 1983, and as a performer and singer since 2002.

Between Eye and Understanding

The series of dry-point etchings Ruis/Noise, which Alexandra Roozen made in 2009/2010, was followed in the next years by a series of drawings titled Between. Beyond the difference in technique there is a difference in the arrangement of the lines making up these works. In the etchings we see horizontals which completely fill out the sheet and the image; in the drawings the lines have been arranged according to a double grid of two fans that emerge from two focal points, which lie to left and right and beyond the borders of the sheet.

The lines that build up these etchings and drawings are made in a similar way: a drilling machine tracing the lines with an etching point or pencil. This technique thus produces lines that are non-continuous and staccato.

Together with other series, these works are part of a lengthy experiment conducted by Alexandra Roozen, in which she researches how to alienate the act of drawing from herself in fundamental ways. For example, she used a drawing machine that could execute commands automatically, and also semi-automatic techniques with the aid of a drilling machine that functioned as an extension of her arms and hands. In the case of the automatic drawing machine, her role was reduced to supervising the production process, and feeding the machine with paper and pencils. Using the drilling machines as an extension of her own acts and movements, she seems to be trying to energize the machine with her body energy or – what amounts to the same – to mechanise the energy of her drawing acts.

One of the pivotal characteristics of Roozen’s art is that she again and again seeks a confrontation with the technical limits of her material, actions, concept, and execution. Mechanising her drawing skills is a logical consequence of this, although never before has her physique, her actual body, been so present or not present in her work.

Roozen’s artistic research challenges some fundamental aspects of European artistic traditions. Alienation through mechanisation eliminates just that aspect for which the art of drawing has always been admired: the hand and the eye interlock to create an image, the hand that is simultaneously speaking and writing. Roozen has connected this with the old fascinations about the non-human, about the machine that we invented and that eliminates the human element. What is the significance of drawing without the direct, so-called expressive contact between mind, hand, pen and paper? Can that still be called speaking and writing at the same moment? What status do we assign to a drawing by a child? by an elephant? Is a drawing from Tinguely’s drawing machine a Tinguely, even when not signed?

The hate/love relation between man and machine is in itself a culture-shaping force; the machine is deeply embedded in our human identity and self-awareness, both as an opponent and as an ally. With utensils and machines as prosthetic aids we make discoveries, however forcefully we dream these aids away again as we prefer to own our discoveries as human ones. Is man the animal that prefers to dream its knowledge and thus transforms science in fiction?

It is nonsensical to think that machines pose an a priori threat to the human; they open up new possibilities. This could be considered a first result of Alexandra Roozen’s project: she confirms that a far-reaching mechanisation of the act of drawing brings about interesting possibilities and leads to beauty. She presents the discoveries of the prosthesis. Her project shows her trust in the transformation of mechanics in culture, in the evolution of the prosthesis into experience and presence, fiction and imagination. This makes her project as a whole a cultural statement.

In a conversation we had about her experiments, Alexandra Roozen mentioned some of the inspirational forces that stimulated her research; once again I could not help noticing how close in artistic practice the philosophical is to the concrete. This has to do with how the artist deals with her questions, experiments and sources; these underpin an original and existential impulse that does not take for granted that the answer is enclosed in the question.

Roozen’s art is concrete, that is to say that it makes use of all kinds of fundamental rules, grids and visual elements to create images. One could infer from this attitude that analytical and logical strategies are dominant, but that is not the whole truth. Analytical research and synthetic application of strategies go hand in hand and often merge into one creative act. Technical analysis is, just like the machine that draws, an instrument to make discoveries and not an end in itself. Concrete art is the interplay of the personal impulse and the objective technique; Roozen’s project is as tied to her person as it is to her machines.

Alexandra Roozen herself observed that something special happens in the works of the Between series; the horizon emerging from the structured lines, she herself associated this with landscapes and romantic art. Concrete art is primarily autonomous, and never produces representations of reality (not even as a spiritual equivalent). But Roozen took up the challenge that she felt was put before her by a certain visual element that introduces a significance that precedes the artwork. From the moment this line or the suggestion of a horizon-space has been introduced, the image isn’t just work anymore, but positions itself in a space between an autonomous play of visual elements on the one hand and referential meaning on the other hand, between abstraction and a visual fact from reality. Because of our evolution, the line that separates sky from earth, up from down, is the least innocent line Homo erectus knows.

Looking at the history of art it appears that particularly the elimination of the horizon line led to the first abstract paintings in which up and down, front and back became elusive. Of course, first there was Leonardo da Vinci’s defence of the atmospheric perspective as an alternative to perspective based on centering lines; he writes for example about aerial humidity and shapes and colours disseminating with distance, so that we perceive space and its gradations. Three centuries later the radical experimental paintings of William Turner make a spectacle of water and air, rain and smoke, how these mingle and move and ban every logic from perception. Another century and a half later depth and surface become the same in Claude Monet’s mirroring surfaces in his Giverny works; water and sky do not reflect anymore, are folded upon each other and a whole new presence is presented to our vision.

I think these painters showed the prime importance of space and spatiality for our perception, seeing and experiencing – ultimately more important than temporality and rhythm. We become aware of rhythm and duration when we move our body through space. Time experienced is a consequence of space experienced, which is primary because it physically surrounds us – which is something we cannot directly say about time. Time and temporality is a recent and modernist way of measuring space, something of a prosthesis that became embedded in our nature and that we now use to measure distances and velocities. Records of mystical experiences typically lack the sense of time or explicitly reject it as important or meaningful, which is never the case with categories like the body, space, light or vision. These may have been some of the intuitions that induced Alexandra Roozen to allow the horizon space to play its part in her technical drawing experiments.

Roozen’s prosthetic drawing is exciting because the rhythmic and instrumental gestures are carried out with consummate consistency; what is recorded on the supporting material is a galaxy of traces. She changes the character of the gesture, but the act of drawing, the movement in space and as a consequence the evocation of space, space coming into being, is not essentially different from classical or modern forms of drawing. One of the reasons why the art of drawing is so interesting has to do with the evolutionary importance of material traces, of physical imprints and impressions. In her idiosyncratic attempt to end the art of drawing, Roozen continues it as an act by which a person may entrench herself in space (and place herself outside time).

The horizon carries great significance; Roozen’s staccato traces crystallize around it and present as it were the naked elements of human perception. The Between series present the horizon as an in-between space, always retreating from my sight, always coming towards me and enveloping me. I read Between as Between Eye and Understanding.

Supported by Mondriaan Fund and Centre for Visual Arts Rotterdam.

Between
Scroll to top