From Scratch is a three-part cycle in which the drawings of visual artist Alexandra Roozen are the starting point for the music by composer Willem Boogman.

Willem Boogman: “When I first saw her work I thought: “Damn, there’s my music”. What we share is our way of working from elements. In this way we build larger structures in which the elemental world continues to resound, no matter how many meanings you can attach to the end result. As the title of the cycle From Scratch indicates, I build the music up from scratch, following conscientiously the analytical attitude of Roozen’s way of working. In the music I also translate the different ways in which her work prompts one to look at.” 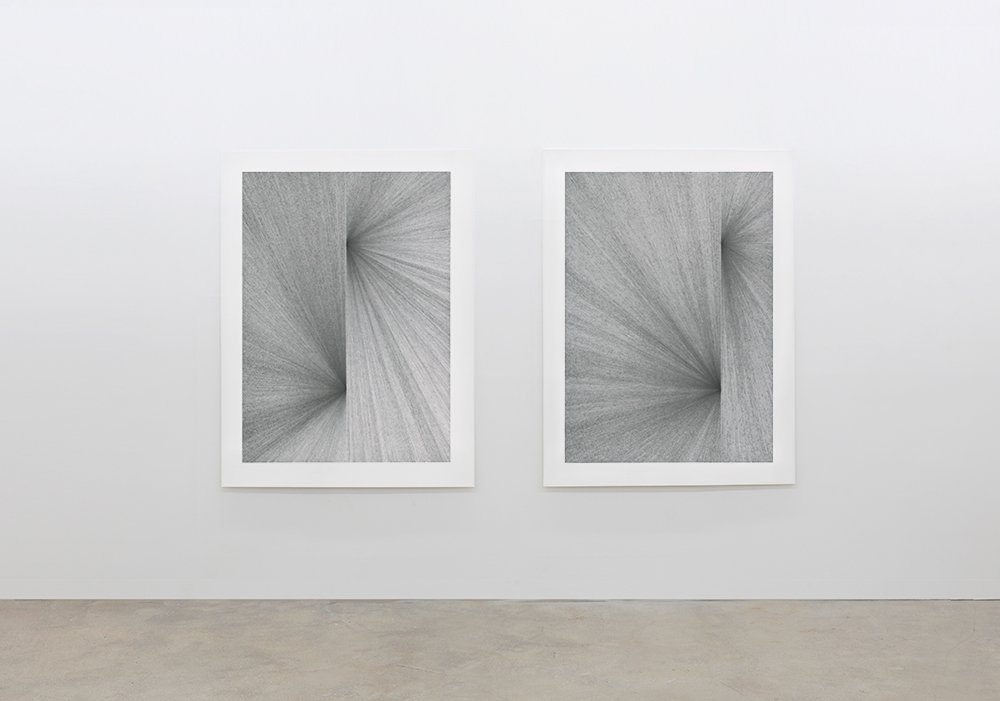 On first sight each of these drawings consists of two black poles from which lines depart that become lighter in the direction of the papers edge. A tight line divides the drawing in two. A closer look reveals that all lines are the result of hatching in parallel tracks. These hatched tracks overlap more and more, thus growing darker in the direction of the poles. So it makes an essential difference when you look at the drawing from a distance of four meters (twelve feet) or from forty centimeters (fifteen inches). For purposes of composing I made use of the hatching, the division in two, and especially the aspects of the visual perception of the drawings.

I consider Time the way music is perceived as a whole. This comprises more than the sum of the elements a composition is assembled of. Parallel to overseeing a drawing, one could speak of the ‘overhearing’ of a work of music as a whole. Different experiences of time are determined by the scale on which a sound reveals itself: for instance the very quick, short noises of bats or the very slow sounds whales produce. These scales can exceed human measures. A star can produce a periodic vibration with the duration of a day, which is so low that you might feel the vibration, but could not hear it. In From Scratch I complex passages occur that can hardly be followed with the ear. The complexity of a musical texture or allowing a certain amount of chance in producing tones give us a different experience of time in music than usual.

Duration is the experience of the speed at which sound events follow each other. That can be very fast, extremely slow, and anything in between. Different from Time, the variation in duration in sequences of sound events can always be related to experiences in human life. I like to consider the game of different durations in a composition as a music-dramatic plot.

Rhythm is the physical experience of organized durations of tones in a metrum. Rhythm is, among other aspects, related to speaking and to movements of the human body. Rhythm and pulse (cadence) are linked together. They can be split up, but even then a pulse will be held by the musician or the conductor in a tempo.

The composition
The ensemble’s arrangement corresponds to the composition of the drawings. The seven musicians are divided into two groups: three on the left, three on the right and the percussionist in the middle. The hatching, so characteristic of the drawings has been made audible at the beginning of the piece: the percussionist scratches back and forth between two rulers, like Alexandra Roozen does. From Scratch I ends with the tinkling of a bunch of the kind of graphite markers, with which she works. Between the beginning and the end three phases can be outlined. These phases consist of three different timescales in which the music evolves, according to the perception of the drawings from a larger to a smaller distance.

The first phase covers the overview of the whole drawing (picture 1, overview of Plain Dust #5 and #14). Here I work on a large scale, as rhythm and duration are almost identical. Two musical occurrences alternate regularly: a repetitive fundamental tone, becoming slightly longer with each repetition and a short, ascending fundamental tone of a fixed duration. The trombone plays the two fundamentals on which the entire composition is based. The other musicians play rapidly rising notes from the harmonic spectrum of the fundamentals. This explains the prescription of microtones.

The second phase is ‘half zoomed in’ and consists, as can be seen on the second picture (picture 2, a detail of Plain Dust), of tracks of repetitive hatching movements and rising ascending lines from a black pole. In the composition the hatching movements lead to tones going up and down very quickly. The ascending runs for the string players, supported by percussion, start over and over with low, vehement scratching, becoming more transparent and softer rising upwards, before they dive again. This movement is repeated a number of times, while the duration of each repetition increases. This is followed by an intermediate phase, in which each musician performs his or her own track with two or more tones to play. Rhythms gradually begin to emerge, but their outlines are lost in the many oscillating movements of the tones. Here the repetitions eventually are stabilized in equal durations.

The third phase is the smallest scale on which my music develops. For this phase, in which the music zooms in on minute details, I took another series of drawings as a point of departure with the title Trills. In Trills the variety of details is even larger and more explicit than in ›Plain Dust‹ (picture 3, a detail of Trills). These details make me think of small musical motives. The wind players play their little motives percussively and extremely softly, making the production of pitches insecure. The string players play extremely high notes, by ticking on the strings with a coin, which evokes a micro world of floating tones. These continuously varied and constantly repeated motives are thus subject to a certain amount of chance. 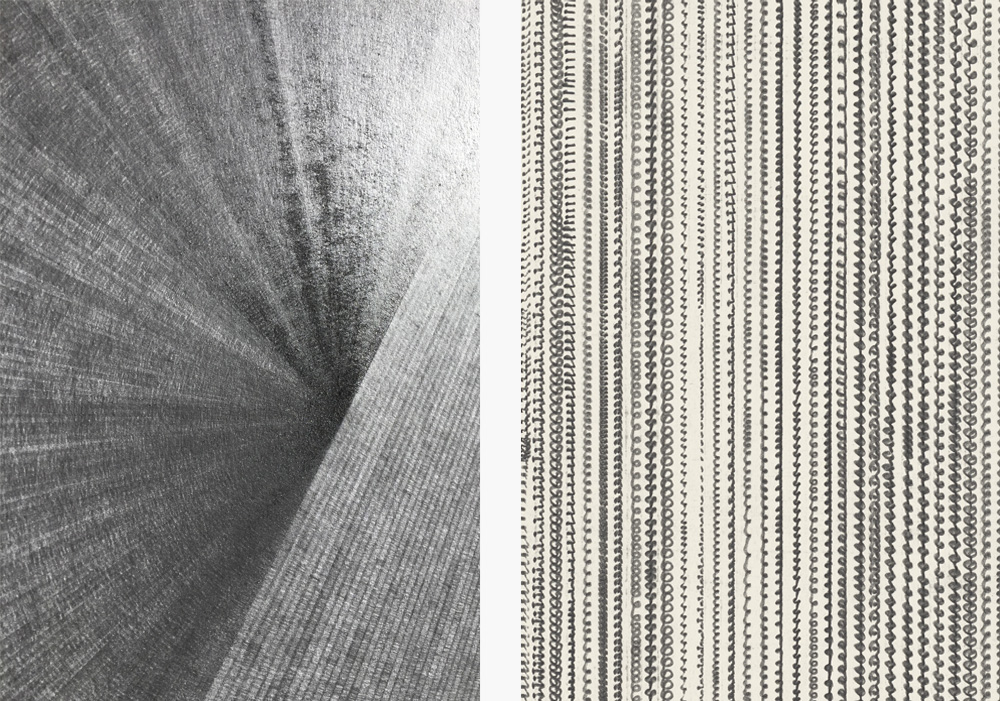