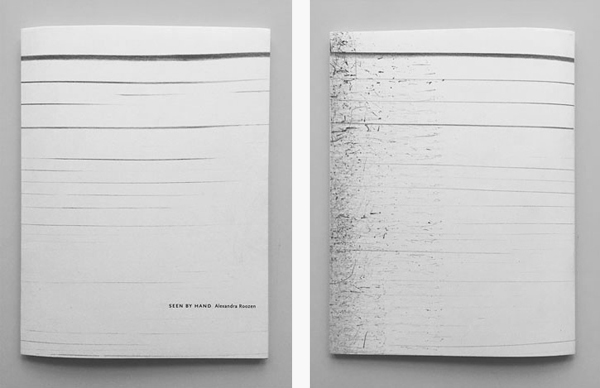 Cees de Boer (1955) studied Dutch, General Literature and Philosophy. In 1995 he obtained a doctorate for a thesis on the collage novels of Max Ernst. Since 1983 he has been working as a freelance writer and exhibition curator. In 2015 he was co-curator (with Colin Huizing) of the Dutch pavilion at the Venice Biennale, with the presentation of the work of herman de vries ‘to be all ways to be’.

Alexandra Roozen’s drawings and graphic works are part of a long-term experiment in which she partially disowns the act of drawing by setting this activity mechanically under pressure. For example, she developed a drawing machine that carries out assignments by itself; she used a drill as an unnatural extension of her arm and hand to draw or to leave traces in a metal plate. An important aspect of distancing of this kind is that the artist not only performs an action but to a large extent supervises the production process to enable chance (in this case the wilfulness of the drawing machine or drill) to make its own contribution to the process. Still, Roozen’s hand is never entirely absent; the dynamism between hand and machine is what determines Roozen’s research, which thus remains research on what drawing is or can be. Each project, defined by the choice of a particular instrument, sets out to discover an aspect of drawing. The result each time is a series of works, each of which creates its own world.

To draw is to leave traces – lines, dots, scribbles, patches. To draw is also to wipe out traces – to reintroduce the white of the paper in the drawing, not to erase contours completely. Drawing is an exciting dialogue between presence and absence, between representation and suggestion, a particular balance between spontaneity and control. In Roozen’s series of dry-point etchings Ruis/Noise (2009/2010), each horizontal line is produced as an irregular trace of the needle that was inserted in a power tool; in the series of drawings Between (2012) we see the traces drawn by a pencil driven by a power tool. The concept of the trace is adequate for Roozen’s entire research: whatever machine she uses, whatever equipment she constructs for the physical process of drawing, each time the result is a trace of her actions. Every trace, regarded as a drawing, is a form of autonomous art. No matter how technical the process may be that Roozen adopts to turn drawing into an autonomous artistic activity, the result is like a natural phenomenon: a phenomenon that is present in all its complexity, regularity, randomness, expressiveness, visuality. Whatever world is created by a group of works is a question of interpretation that takes place after the works have been created.

Roozen’s research calls into question several fundamental aspects of the European artistic tradition. Her mechanisation of drawing eliminates what has always been praised in the art of drawing as human and philosophically valuable: the hand that creates an image, the hand that thinks aloud, that writes and speaks at the same time.

This classic aspect of drawing is echoed in the title of a recent series of works: Seen by Hand. Like the hand that thinks aloud, according to this title the hand itself sees. Hand has become eye. The optical sense itself is rendered secondary and assigned the task of interpreting what the hand has ‘seen’, in which ‘has seen’ means ‘has produced the act of seeing’. The hand has become autonomous and transforms its sense of touch into that of sight. The drawing is what the hand has seen.

Roozen’s drawings are to a large extent structured in a concrete way and this too contributes to the fundamental character of her drawing. ‘In a concrete way’: the possibilities of structural and geometrical principles of image making are utilised to arrive at images (see, for example, the series Noise and Between mentioned above). While the mutual interchange of eye and hand can still be related to the classical sensorial nature of drawing, as a result of the devices that Roozen deploys this sensorial quality is approached from an unconventional angle. Roozen in an interview in her studio: ‘By providing my hand with an instrument, I get to know my hand in a different way and I discover aspects of my personal domain that surprise me’.

In the case of Seen by Hand, the instrument is a number of pencils that are held together more or less in a single line by a strip. This strip is held between two pieces of wood and drawn over the paper in a single movement. The movement, the resistance of the paper, the flexibility of the attachment within the strip and other factors produce the image in which the smallest nuances of movement and resistance become visible. For instance, if a number of the pencils fall from the line and fail to take part from the start, the result is a relatively empty, white drawing. It invites comparison with the images that roll out of a seismograph, a hygrometer, a cardiograph or a brain scanner, but there is a fundamental difference. The latter are recorded on a strip of paper that as such symbolises the passing of time. The passing of time is indeed present on the sheet of Roozen’s drawing and can be read from left to right or from top to bottom, but still the work is not primarily about time; image, diagnosis, limiting conditions, recording are merged into one another. No matter how far Roozen moves towards and touches on the concept of mechanical recording in the Seen by Hand project, her drawings can never be reduced to that. The curves that lie side by side have influenced one another in the drawing process; each curve is also a recording of the (earth)quake that its neighbour has both recorded and caused.

In an earlier text on Roozen’s work, I noted that her drawings refer to the importance that the reading of traces has had in human evolution: the interpretation of footprints, of impressions in matter, of scratches on the bark of a tree or on a rock, of bent blades of grass, and so on. This reading of important traces also made people aware of the traces that they leave themselves – see the famous impressions or contours of hands that can be found in prehistoric rock drawings.

Both the title and the drawings of the Seen by Hand series remind me of a masterpiece of twentieth-century art, the series Histoire Naturelle (1926) by the Franco-German surrealist Max Ernst (1898-1978). There certainly are strong parallels between the work of Roozen and Ernst – Ernst too developed special artistic techniques to find a necessary form for the concepts that played in his head. The surrealist writers developed the technique of automatic writing – jotting down a flood of intuitions without rational control in order to select the most strange poetic fragments from them later. Max Ernst found the visual parallels to this, primarily in the techniques of collage and montage – for example, the thoughtless combinations of everyday, readymade images until unseen, unsuspected, improbable and unconscious meanings began to crackle spontaneously in the visual material. Another technique he developed was frottage: placing all kinds of materials and objects under a sheet of drawing paper and then rubbing the surface with a pencil to translate their structures and contours into autonomous images. By moving the paper on top of the same object or of different objects while continuing to rub, the final image that results has mysterious connections and evokes associations with familiar objects and structures. 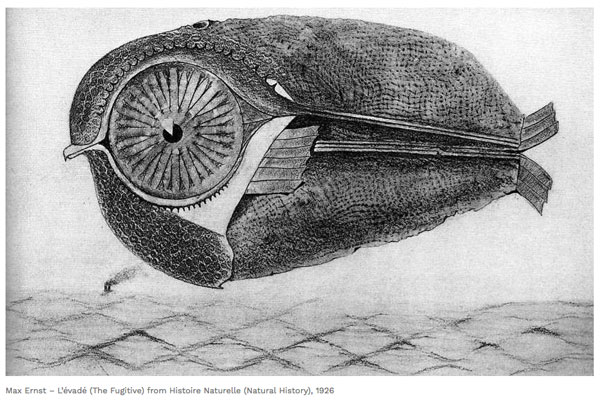 During frottage structures and meanings are also produced that are not sought by the artist: how are the forms that loom up to be related to their constituent parts? The objects underlying the plumage of a bird might be the leaves of trees, the structure of a rough stone might serve to render the skin of a horse, fishbones or the cogs of a machine component to render eye-lashes. Max Ernst created a natural history with unconventional affinities as its protagonists. A non-nature, in the sense of an alternative nature, is what emerges.

Max Ernst described the discovery of his frottage technique as a moment of insight and revelation. Once when he was staying in an old inn, he found a wooden floor in his room that was so worn by scrubbing and polishing that the grains and structures of the wood had become clearly visible. They were patterns that fascinated him and the forms and faces that he descried in them obsessed him. He placed a sheet of paper on the floor and by rubbing the surface with a pencil he isolated these structures. The result was spontaneous images and representations. Ernst collected them in his Histoire Naturelle, a series of drawings with titles such as la mer et la pluie (the sea and the rain), tremblements de terre (earth tremors), les pampas (the pampas), le sphinx dans son écurie (the sphinx in his stable).

These frottages by Max Ernst are Seen by Hand, especially when he suggests that these images are manifested through a force of their own and enter the artist’s eye through the moving hand.

While Max Ernst was transgressive in breaking figuration open, Roozen offers the abstract equivalent of this approach; she is not aiming at an artistic vision, but concentrates primarily on the physical action of dragging the pencils from one side of the paper to the other. As a result her research remains completely open and unsought results can appear. The clouds and gusts of lines and scribbles, the traces of hand and instrument, are like the abstract, sometimes open, sometimes closed textures of sounds and sonorities in the compositions of Györgi Ligeti, and the random – because not written out in the musical score – interaction of instruments in the compositions of Witold Lutosławski.

In her new series of drawings Seen by Hand, Alexandra Roozen places us as viewers before abstract and largely random structures of drawn trails; she gives little more than a technical explanation of how the pencils are joined together and how she has found a way of drawing them over the paper at the same time. No mythological or psychological stories, but a context of notions such as experiment, drawing machine, laboratory, research. In her drawings her work is a parallel to what since the 60s has been called fundamental painting, partly because it demands from the viewer a heightened attention to what I would call the autonomous or virtually material details of the result.

Let us resist the temptation to interpret the traces in her drawings as traces of something else, and let us try to see them as events that want to be seen for what they are. In that case we also come very close as viewers to what it means for Alexandra Roozen to raise fundamental questions in order to make room for unexpected and perhaps unsought answers. After all, our questions are often no more than the formulation of a suspicion; it is all the more important to listen carefully and to look at the answers that are thrown into our lap.

* Alexandra Roozen studied painting in the St Joost Art Academy in Breda. She graduated with a fundamental material research; she scraped the paint from her paintings and placed it in jars in front of the canvas; she also removed the painting from the stretcher and turned it into a sort of bag for the wooden pieces of the dismantled stretcher.

Translated from the Dutch by Peter Mason, Rome

Supported by Mondriaan Fund and Centre for Visual Arts Rotterdam.